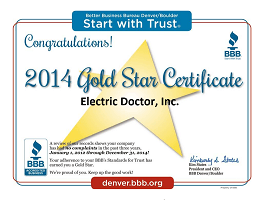 Electric Doctor Inc. is an electrical contracting and audio/video installation contractor in Littleton. The Better Business Bureau Gold Star Award is given to companies that display excellence in customer service and have had no complaints for three consecutive years. This award marks 11 consecutive years with no complaints, an achievement that highlights Electric Doctor Inc’s company values of customer service and quality workmanship.

Electric Doctor Inc. is an Electrical Company based in Littleton, CO, with a team of fully licensed & insured Electricians. Electric Doctor Inc. provides electrical, lighting, and audio/video services for residential, commercial, and industrial clients throughout the Denver Metro Area.