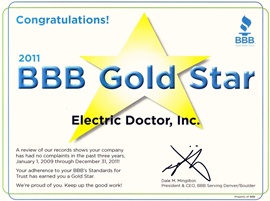 Electric Doctor strives to continue operating with its founding principles of quality work at reasonable prices. Offer the best service and the best installations possible for all our customers. Opening for business in 1995, Electric Doctor became a BBB member in 2000. Electric Doctor earned a BBB Gold Star Award in its first eligible year of 2003 and has earned a BBB Gold Star each consecutive year thereafter. A distinguished honor in the electrical service industry and an even larger honor when including all the lighting and audio/video projects as well.

“The 9th consecutive BBB Gold Star Award is a great way for us to display our ongoing commitment to our customers. I started this company on the principles of quality work, quality electrical service, and quality prices. Its been our honor to grow to include lighting and audio/video installations to go along with our electrical foundations. Earning this award from the Denver/Boulder BBB in all of our eligible years is an honor.” said President Craig Bisgard

Electric Doctor is a Denver Electrical Company based in Littleton, CO, with a team of fully licensed & insured Electricians. Electric Doctor provides electrical, lighting, and audio/video services for residential, commercial, and industrial clients throughout the Denver Metro Area.