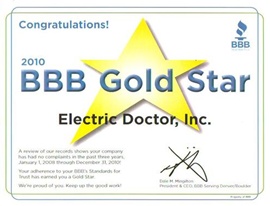 Littleton Electric Company Electric Doctor has been awarded the Gold Star Certificate Award from the Denver/Boulder Better Business Bureau for the 8th straight year. The Gold Star Award is given to companies that display excellence in customer service and have had no complaints for three consecutive years.

“Our 8th consecutive BBB Gold Star Award is a great honor for our company. Our goal has always been to provide the highest quality and professional installations to every customer. Earning this award in every eligible year with the BBB demonstrates our continuing effort to promote our values and competitive prices” said Vice President James Bisgard